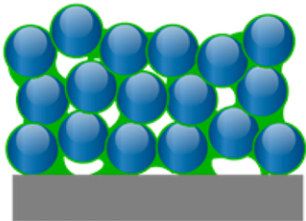 In this work, we present the fabrication of nanoporous polymer-infiltrated nanoparticle films (PINFs) with either uniform or graded porosity based on undersaturated capillary rise infiltration (UCaRI) and study the processing-structure–property relationship of these nanoporous PINFs. The UCaRI process involves first generating a bilayer film of a randomly packed nanoparticle layer atop a polymer layer, such that the volume of the polymer is less than the void volume in the nanoparticle packing. Subsequently, the bilayer film is annealed above the glass transition temperature of the polymer to induce polymer infiltration into the voids of the nanoparticle packing. Using in situ spectroscopic ellipsometry and molecular dynamics simulations, we observe that the polymer transport occurs in two stages: capillarity-induced infiltration, followed by gradual spreading, likely via surface diffusion. By varying the annealing time, UCaRI enables the generation of graded or uniform nanoporous PINFs. We also show that these nanoporous PINFs have tunable optical and mechanical properties, which can be tailored simply by changing the nanoparticle to polymer layer thickness ratio in the initial bilayer. The UCaRI approach is versatile and widely applicable to various polymers, which allows generation of nanoporous PINFs for multiple applications.

Dynamics of polymers under confinement